You can get some great results with a regular unmodified DSLR and a tracking platform. But if you’re looking to take the next step with your DSLR images, but can’t justify spending £3000 on a Nikon D810a, then modifying an older generation camera will give similar results for a tiny fraction of the cost. The astro modification process is also reversable simply by swapping out the new filter for the original one.

Replacing a camera’s standard hot mirror with a UV/IR cut filter will allow much more light from the red end of the spectrum to pass through to the sensor. In particular, the all-important H-alpha light emitted by most nebulae. The chart below compares the light transmission profiles from a standard Nikon D5100 with an astro modified version. 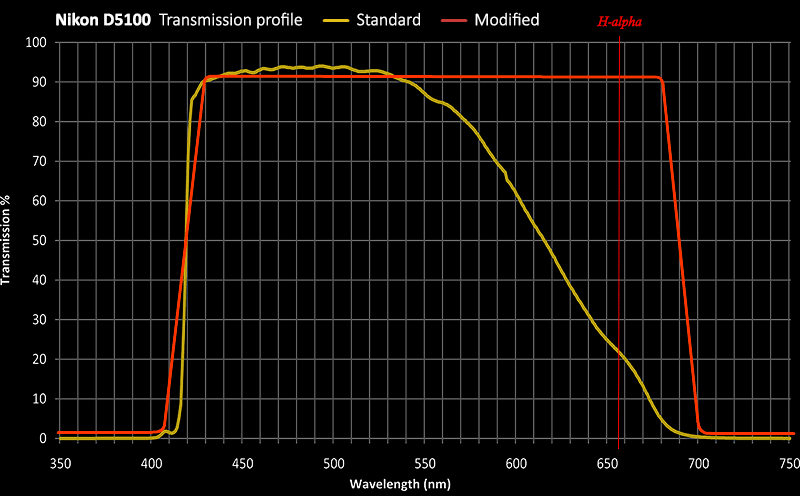 Measuring the light levels at the H-alpha wavelength (656.28nm), the unmodified camera will allow just 22% of light coming through the lens to hit the sensor. Whereas the modified D5100 will record around 92% of the light at this range. This is roughly a 320% increase, with around 4.2 times the amount of H-alpha light finding its way to the sensor.

The results can be seen in these before and after test images of the North America Nebula. Much more detail can be made out in the 7 minute exposure (14×30 seconds) from the modified camera. In particular the fainter areas of nebulosity become much more noticeable. One downside is that the extra wavelengths seem to produce more coma around the stars.

Drag the image below to compare the two shots. The regular D5100 image is on the left, the modified version on the right. 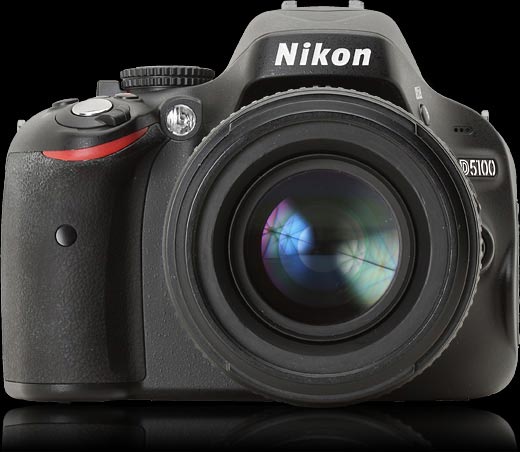 After narrowing down the options, I decided to buy a Nikon D5100 specifically for the job. The camera is relatively easy to modify, and I already own several Nikon lenses making the choice easier. With the same excellent 16MP sensor as the trusty D7000, the D5100 also has the benefit of a flip-out screen, making it much easier on the neck. They currently sell for as little as £100 on eBay

If you have an old/spare DSLR, you may choose to modify that instead. The system of lenses you may own will also impact your decision. I have less experience with Canon and other manufacturers, but the 60D looks to be the equivalent in the Canon world. Whichever camera you choose, you’re likely to find a step-by-step guide on the LifePixel website.

In the case of the Nikon D5100, the dimensions of the new filter should be 29.5mm x 31.5mm. The thickness of the filter should ideally be 1mm to preserve the focus calibration. If using live view to focus this won’t be an issue. However if needed, the focus can be manually re-calibrated using the two hex screws inside the cameras’s shutter box.

IR cut filters will vary in the wavelengths they allow to pass through, so it’s vital to make sure that the filter allows full transmission at H-alpha wavelength of 656.28nm. The exact filter I used was the 50mm IR Cut Borofloat Hot Mirror from Stock Optics available here

for £1.50. Marking out the exact dimensions with a pen then scoring along the lines. I then clamped the filter between two peices of wood to make sure it broke cleanly. Using a microfibre cloth to protect it from damage.

These are the specific steps for modifying the Nikon D5100. The process may look a quite daunting, especially using the LifePixel method. It is a little fiddly in places, but it can be done with much fewer steps than they show. The hardest part is making sure no dust gets onto the filter or sensor, so aim to do it in a still room with as little dust as possible. You should take your time and prepare all the tools and parts beforehand. The process itself should take around 20-30 minutes to complete. 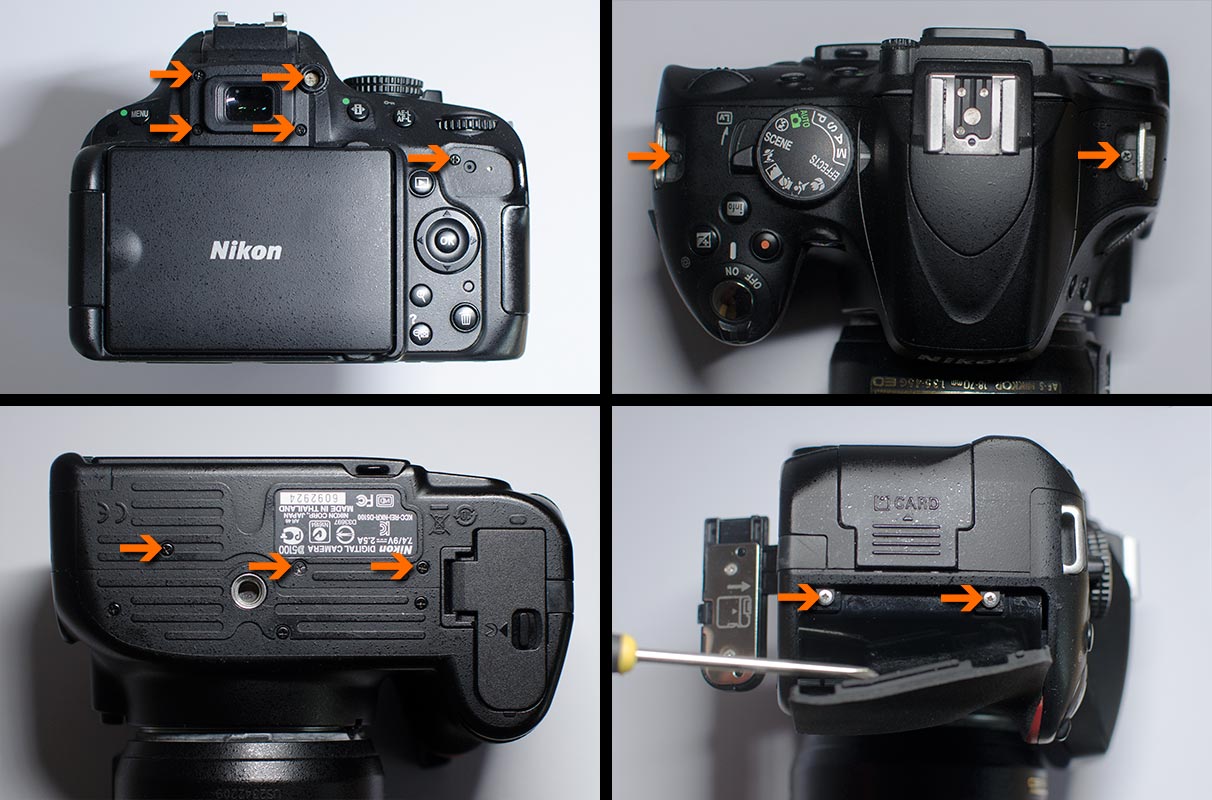 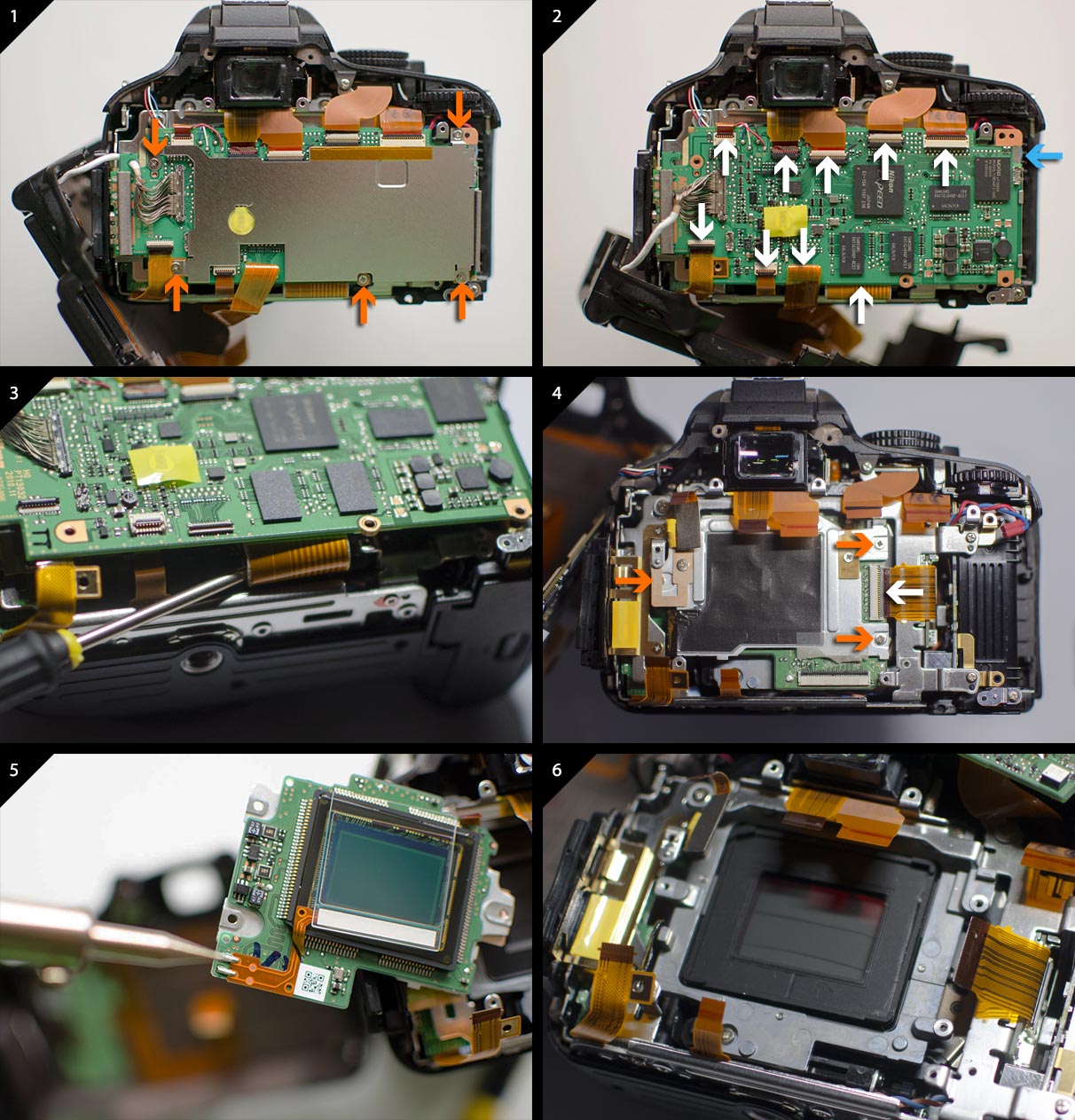 Remove the five screws holding the metal casing in place (1). Unplug the power chord (blue arrow) and gently open each of eight holding mechanisms (2). Slide the ribbons out one by one. The bottom ribbon is the trickiest. First, unseat the HDMI/AV ports from the left side of the body to give better access. Remove the sticker holding the bottom ribbon in place, and gently open the holding mechanism with a small screwdriver (3). Unscrew the three screws holding the sensor housing (it is important that these screws go back in at exactly the same hole and position, so be sure to mark these screws before they come out). Unplug the ribbon (4). To remove the standard hot mirror, you’ll need to de-solder the two connections (5). This will also remove the camera’s dust cleaning mechanism. The final step is to replace the hot mirror with the UV/IR cut filter (6). Seat it in the rubber housing and place it face-first above the shutter mechanism. Finally, reverse the steps shown above to reassemble the camera.