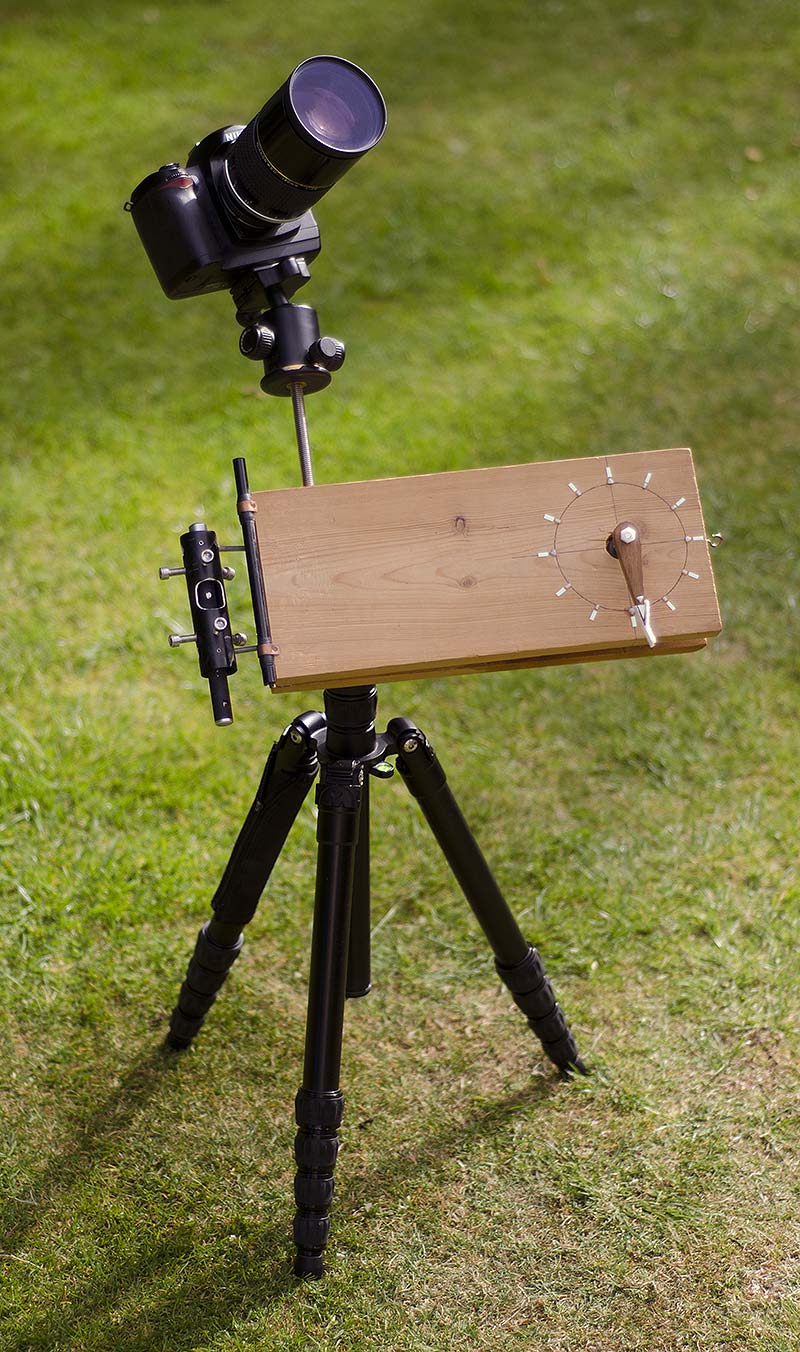 A Barn Door Tracker mount is an inexpensive and very effective solution for taking long exposures of the night sky without producing star trails. There are plenty of solutions described out there on the internet. The design described here takes the best parts from all of these, including several original solutions and enhancements, to create what I believe is the best solution in terms of accuracy, build simplicity and cost…

My original plan was for a motor-driven star tracker with a curved rod design. But after looking into the cost of all the components (accurate stepper motor, arduino, motor controller and suitable gears would come to around £80-100 altogether), along with the complexity of building the circuits, coding the arduino and finding the right gears – you may as well put the money towards a dedicated tracking platform

The tracker I put together using spare parts cost no more than £10 to build in total. Some parts, such as the tripod head, I was luckily enough to have lying around. These would otherwise have upped the cost.

UPDATED DESIGN: After using the original design with some great results, I recently found some areas where big improvements could be made, including camera placement and laser polar alignment. Fortunately any mounts built to the original design can easily be adapted to the new layout.

The updated design has the camera mounted on the side of the top board. This makes composing much easier and improves the tracking performance through better balance. It also allows the ball head to be taken off and used as normal. If you don’t have a spare tripod head, I’d highly recommend the Beike BK-03 .

You will also need a M8 UNC threaded bar available here to attach the tripod head to the top board. For this a 9mm diameter hole should be drilled into the side of the top board to a depth of at least 5cm. This should be done parallel to the hinge, around 4cm along, as shown in the diagram below (click for larger view)..

Using a pivoting drive bolt increases the mount’s accuracy (and tracking time) by around 3-4 times over a regular fixed-position (tangent) drive bolt. Shown below is the simplified solution I arrived at after struggling with a clumsy pivot assembly design described online. The main pivot is constructed from an M8 size barrel nut available here

which slots into a 12mm hole drilled into the side of the upper board of the mount, making it more robust and accurate. 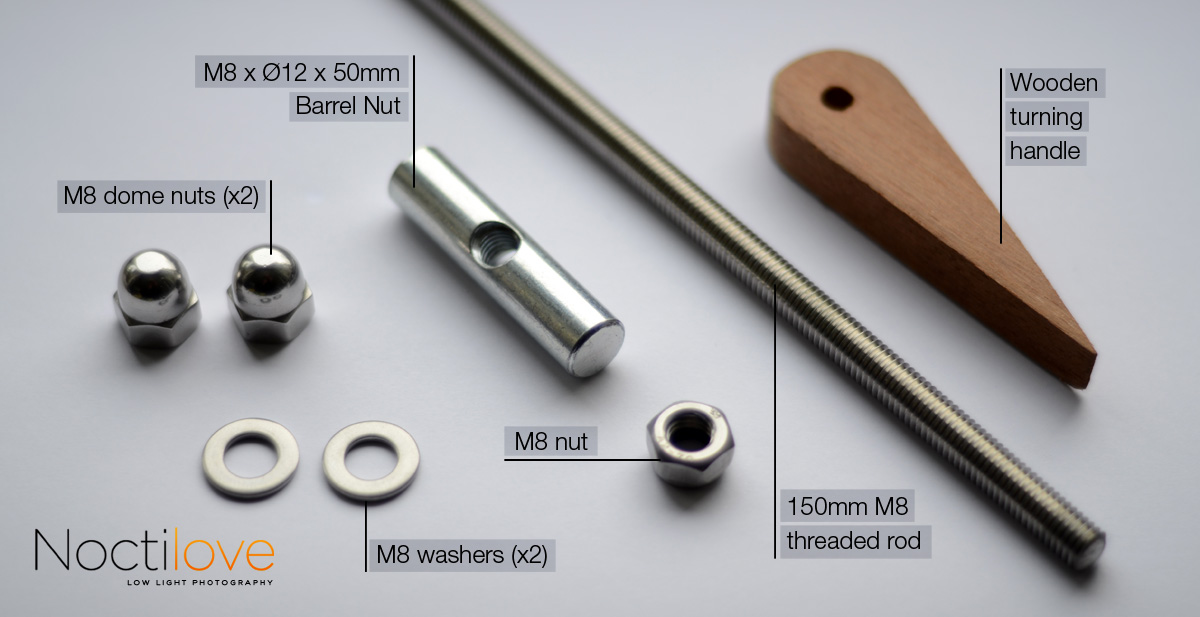 The completed pivoting drive bolt can be mounted by drilling a hole (roughly 20mm in diameter) through the top board. The centre of this hole should be exactly 274mm from the centre of the hinge joint. Drilling a second hole (12mm diameter) in the side of the upper board to intersect the larger hole (as pictured) allows the barrel nut to be slid into place, and the drive mechanism to be positioned.

A small washer (or small nut) should then be glued on to the bottom board where the dome nut meets the bottom board. This allows the drive bolt to remain seated in exactly the same place while the handle is rotated.

Connecting the boards with a hinge at one end allows them to pivot apart. The best option is to use a piano hinge available here which can cover the full width of the boards, be cut to the correct size and so spread the load evenly. The smaller size hinge also gives less play and greater accuracy of movement compared to something like a door hinge. A ball bearing hinge is a good second choice if a piano hinge isn’t available.

The barn door tracker can also be built using an M6 sized drive bolt instead of the M8 size shown. In fact an M6 version has the potential to be more accurate than the M8 version due to the finer thread. Using the same hinge to drive bolt distance of 274mm, the only change needed is a shorter time between the timing beeps (see build enhancements below)…

Many sites recommend using the second hand of an analogue watch to keep time (by mirroring the position of the second hand around the clock face). I always felt this was a bad idea as it’s hard to see the watch in the dark, let alone the second hand! Illuminating it is also not a good option as this affects the exposures. Plus looking at the watch every few seconds doesn’t make the job any easier.

I realised it’d be easier to take eyesight out of the process by playing a beep at set intervals, indicating when the handle should be at the next point. I created an audio file to do this which can be played on a loop via a phone or MP3 player to do its job of time keeping. This is probably the one change which had the biggest impact on accuracy and consistency of shots.

Glow in the dark pointers

These are vital for seeing where the handle is pointing on a dark night. I used a sample sized sheet of glow in the gark vinyl

, which glows for several hours after a second or two under torch light. With this you can cut out a series of markers, then using a protractor place them around the path of handle at 30 degree intervals (5 seconds on a clock face). Again, I’ve seen lots of trackers online, but none of them seem to have this simple addition. You don’t want to have to use a torch when you’re taking dark sky photos!

I added a couple of extra centimetres of felt to the end of the handle to smooth out any hand wobbles or trembling (it get’s pretty cold out there!) It makes a big difference, especially if you’re using bigger lenses.

My first attempt gave some poor results, with the stars forming little circles or semi circles (depending on the exposure length). I found this was caused by the tripod moving as I pushed the handle round. This problem can be eliminated by using a sturdy tripod (and weighing it down if possible) and also by using a small / weak elastic band to hold the boards together. (Using a strong band or multiple bands causes too much resistance).

The camera can be mounted anywhere on the top board, but should have as much room for manoeuvre as possible as it can be tricky to frame subjects. Placing it nearer to the hinge is advisable as this reduces the load on the handle, and prevents the handle from getting in the way of the camera. Mounting the finderscope/laser on the underside also gives some additional room.

Adding a laser or finder scope

Although not necessary for wide angle shots or shorter exposures, adding a laser or a finder scope to the tracker will increase your polar alignment accuracy over the regular sighting tube (see polar alignment section).

Of the two, I prefer the green laser

option as it doesn’t involve grovelling on the floor or contorting your body trying to look through the scope. It also makes things easier as you can see the entire sky, allowing you to get your bearings and attain a good alignment much quicker.

Both the laser and the finder scope methods will also need to be calibrated at first. This can be done by aligning the tracker to a bright star by sighting it through the tube. The laser or scope can then be adjusted in the bracket until they both point exactly at the same target star.

For best visibility the laser should be green as most other colours (especially red) will be too difficult to see.

Warning: Although polar alignment will only take a few seconds with the laser method, it’s worth saying that it may make you a bit conspicuous! If you’re shooting alone this shouldn’t be a problem, but if you’re among other astronomers/astrophotographers you should consider them as the bright beam may ruin their photographs.

Many modern lenses don’t have distance scale which makes manual focusing tricky, especially in the dark. The most accurate method I’ve found is to use live view to zoom in and focus on a star of medium brightness. If you don’t have live view, autofocusing on a distant object before the sun sets works well.

If the temperature is much lower outdoors than it is indoors, you should allow 20 minutes or so for your lens to adapt to the new temperature before you focus the lens, as the infinity focus point of lenses changes with temperature.

Critical focus can be lost by just a slight knock, or even the influence of gravity. To prevent this I use PVC insulation tape on the lens to strap the focus ring in place and stop the focus from shifting. This method can also be used to keep a zoom lens at a specific focal length.

Shooting in RAW maximises the data held in the images, giving much better results with the stacking process. So always double check your settings before starting a shoot! If you don’t have RAW mode, be sure to set the white balance to ‘daylight’ to give best results (this isn’t as important if shooting in RAW, as it can be altered afterwards).

Turn your camera screen brightness down

When you’re out in the dark the images can look overexposed on the camera screen, so I turn the brightness down. This also helps preserve night vision.

Although I didn’t build the tracker to a particularly high standard, it’s still very accurate for exposures of at least 15 minutes with wide angle lenses. I’ve tested it up to 400mm (600mm equivalent for full frame 35mm cameras) with 30 second exposures giving results far beyond what I’d hoped for before I built the tracker. This exposure of the Orion Nebula with a 180mm f2.8 lens shows how well the barn door tracker works, even with subjects near the celestial equator. 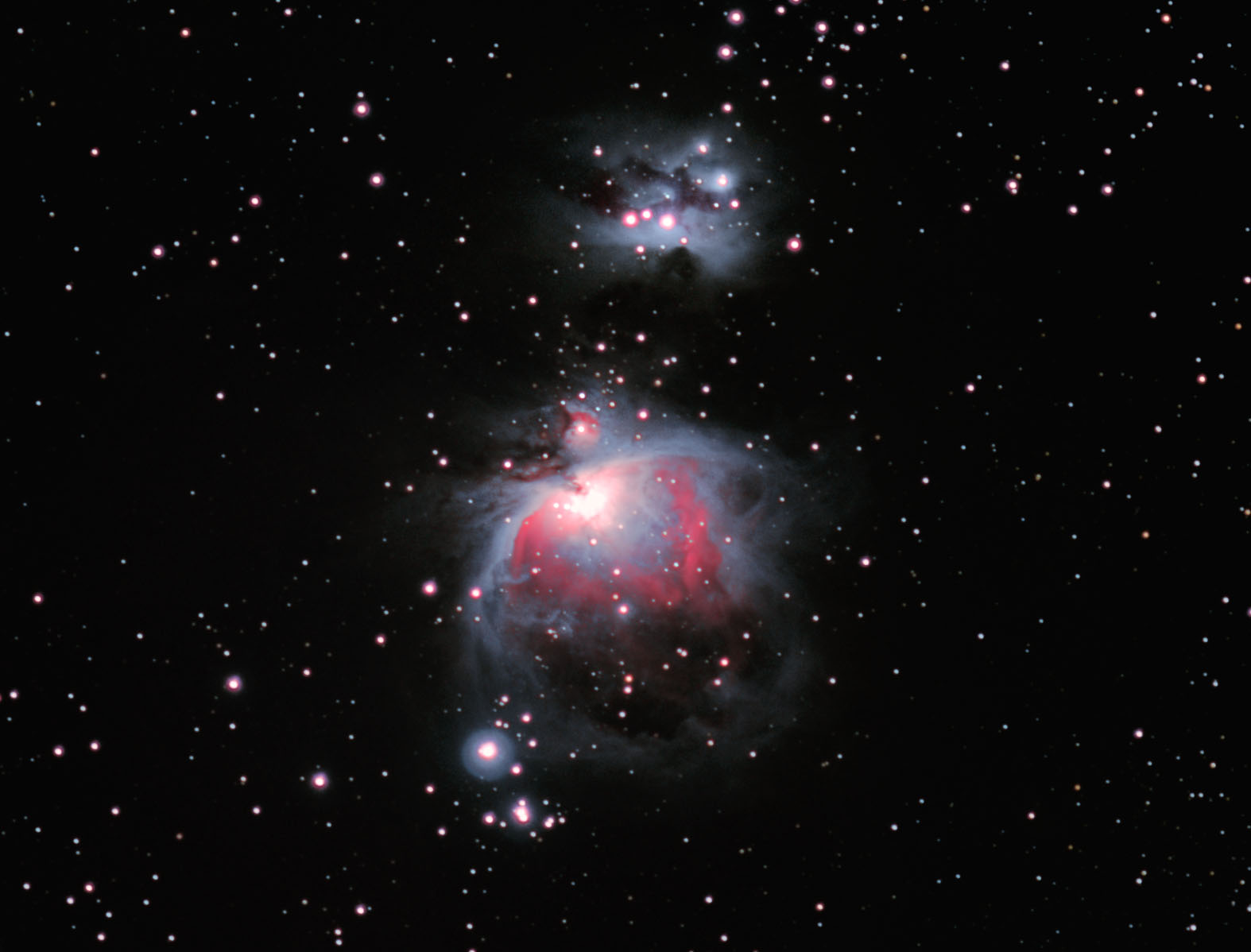 I’ve been constantly amazed at the results I’ve been able to achieve with the barn door tracker. These photos go to prove that you don’t need to spend thousands of pounds on a telescope and an expensive mount. All of the photos in this gallery were taken by me in a light polluted back garden, with a standard SLR camera and the £10 barn door tracker.

Accurate polar alignment is key to getting good tracking and long exposure times. With the laser or finder scope this usually takes less then a minute, but you have to know exactly where the North Celestial Pole (NCP) is (and be able to see it – the stars are pretty faint) to get good alignment. Below is a photo showing the area around Polaris. The target marks the exact position of the NCP. The orange lines on the right side highlight the group of stars which act as a sort of arrow. If you’re able to make those out you should be set up in no time. 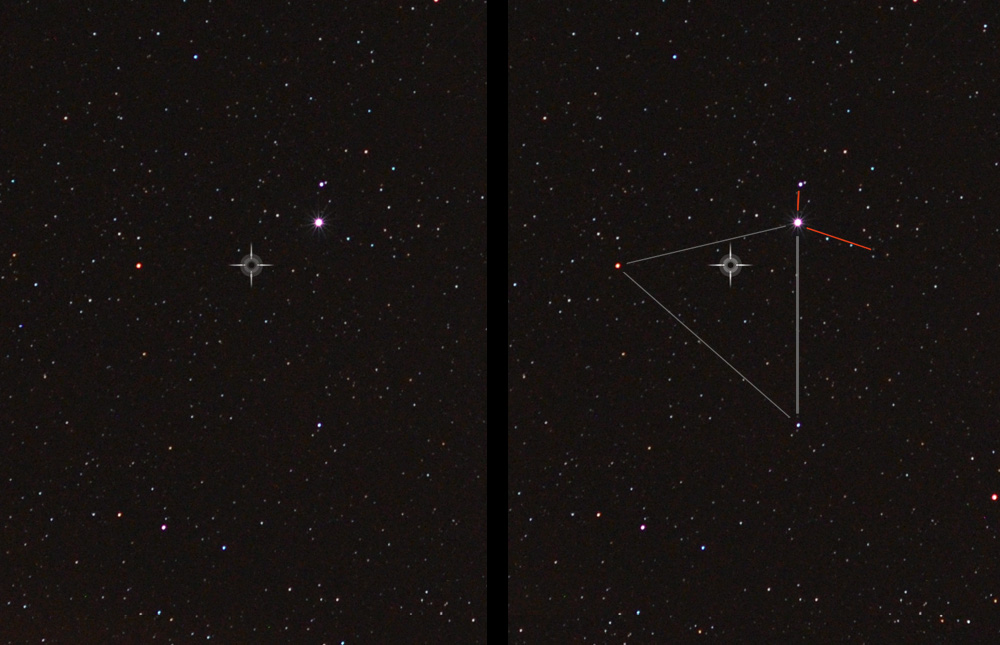 The offset of the NCP from Polaris is handily in the direction of the brightest star in Ursa Minor, which can be used as a wide-view guide to make sure you’re aligned in the right direction. The sky map below shows a wide field view of the region. 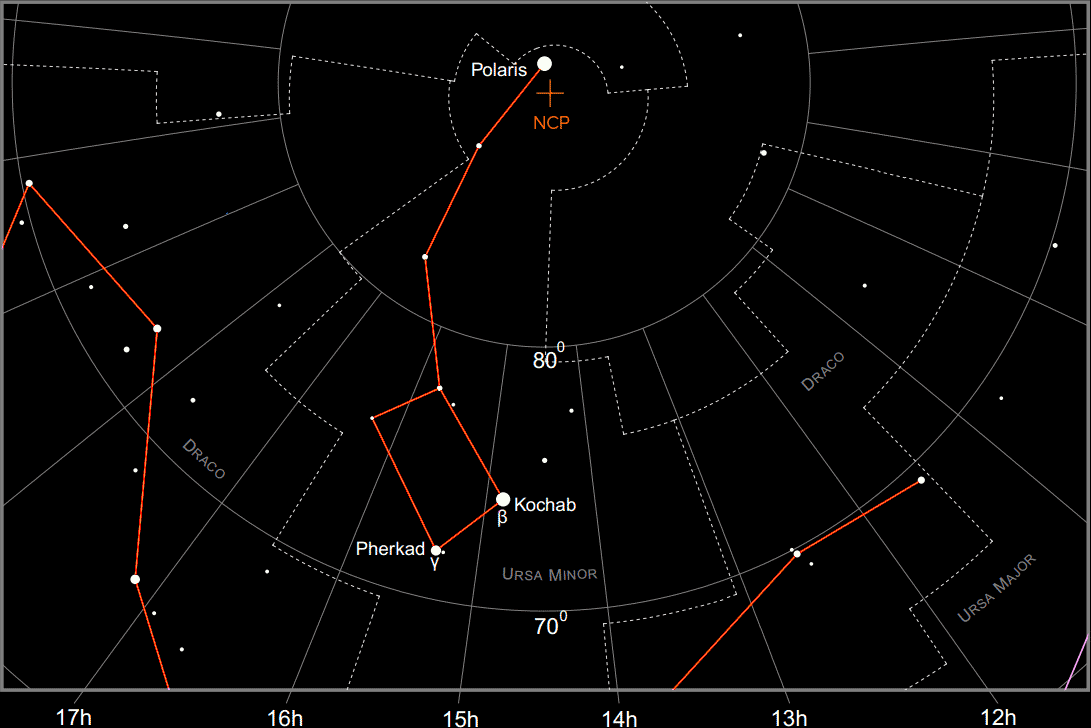